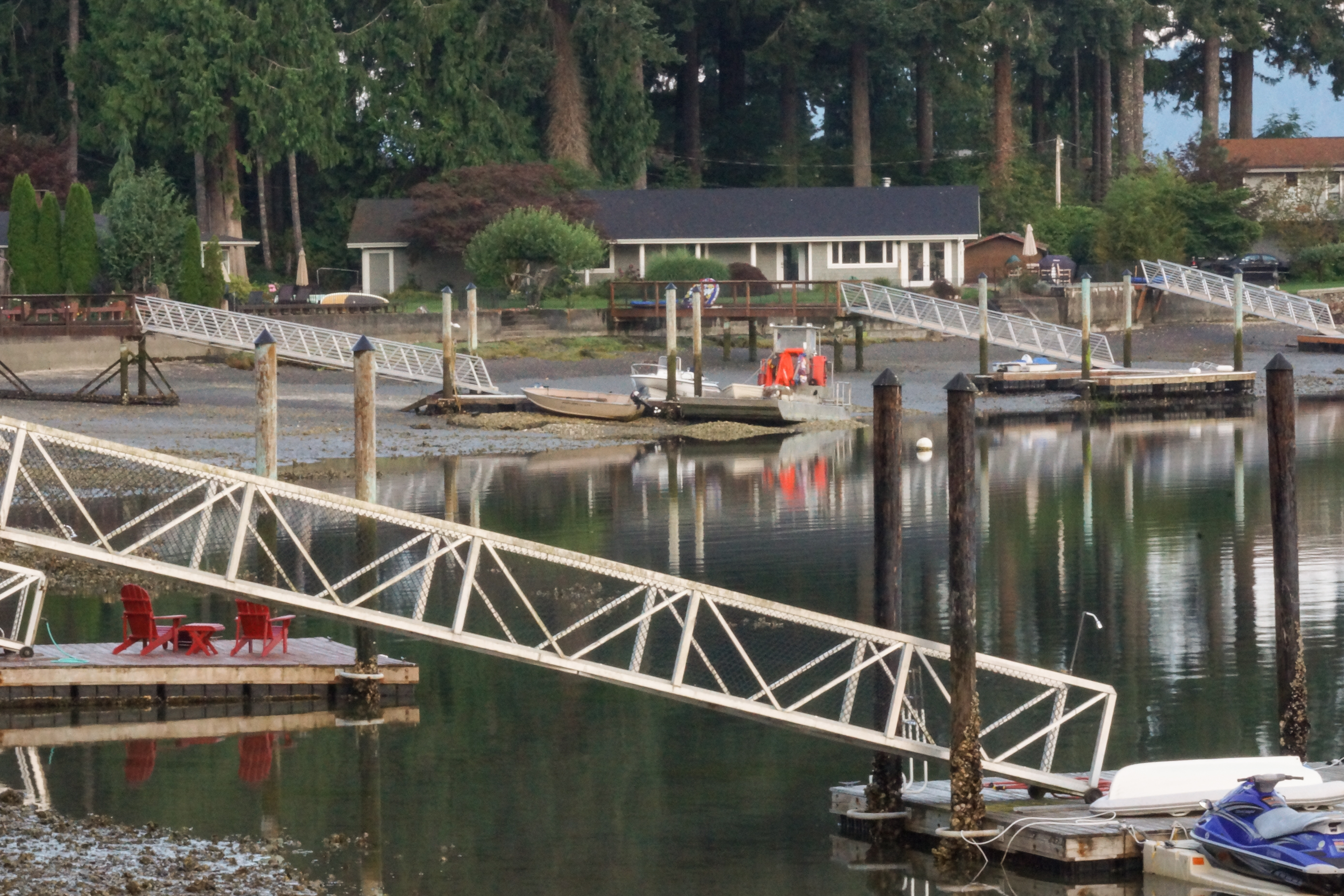 Note: August 18, 2014. THOSE BEAUTIFUL BERRIES IN THE PICTURE LATER IN THE BLOG ARE POISONOUS. I might get my botany merit badge revoked because I wasn’t clear about that. Just thought you might like to know.

We got to go to sleepover camp again this summer up at Hood Canal, Washington. We hadn’t been up there for a year or two. Our friends and neighbors, the Watsons, have a place up there and we were invited, along with the Lees, for the long weekend. I had my eye set for some merit badges: primarily cooking, photography and alcohol consumption.

We were responsible for Friday breakfast; I had a Cooks Country recipe for maple-sausage featherbed eggs. The ingredients sound positively delicious: broken up corn bread, sausage links, cheese, and a custard of eggs and whole milk. Unfortunately it wasn’t all that. We didn’t want to be prepping too much the night before or the morning of so we made the cornbread Wednesday night and prepped most of the other ingredients at home before leaving Thursday morning. We got up to the canal just as the sun was over the yard-arm. We assembled the egg dish, stashed in the refrigerator and headed out to the deck to enjoy the evening.

The Watson’s sail boat, The Equanimity, ties up at the dock. When the tide goes out it is left high and dry. The wind sock on the left side of the picture shows the location of a long spit that reaches out into the canal. About halfway between the the dock and the spit are some oyster mounds that are well out of the water at low tide. Before we arrived, some campers gathered oysters appetizers.

We had a “super moon” while we were there which means we had very high and very low tides. I learned that “sea level” is measured as the mean, lower low tide. There are two low and two high tides each day; on the west coast there is a relatively large difference between the two low tides. An average is taken of the lower low tides; this average is sea level. They use the low tide  as the base in order to assist navigation: ships need to know when they can navigate to port.  A neighbor’s boat, The Barnacle has to anchor in deeper water because ti can’t sit on the mud during low tide, like the smaller sailboats can.

Jay, our camp counselor, AKA Ace grilled some oysters for us. We had them with a dollop of cocktail sauce, horseradish, and a splash of fresh lemon.

Even though I had a beer and a vodka tonic, it was time to work on my photography merit badge. I set up my tripod and took a series of pictures as the sun went down.

I discovered that it is best to work on photography and alcohol consumption on different evenings. Actually, I’m a light weight; one beer and one mixed drink left me feeling not so great the next day. I went tea-totaller style on Friday.

Nevertheless, I woke up early Friday to get some pictures in the morning light. We popped the egg dish in the oven drank coffee and I took some early morning pictures.You can see the tide is ebbing.

Living on Hood Canal means water sports. Every house has a ramp and dock. The boat with the orange life jackets in the middle of this picture is the “oyster barge”.  A local company made a deal with the home owners to harvest some of the oysters for local restaurants. They bag them up at low tide then go back at high tide to pick up the bags according to restaurant orders.

As the tide goes out, the oyster beds are exposed; here a great blue heron hunts through the beds for various aquatic animals living on the beds. A sailboat is lowering down to the ground as the tide goes out.

It took a while for our breakfast to cook; it should have been done in 50 minutes but took about 1:20. The top got a little crusty before the custard in the middle reached temp. It was okay; not great. I was a little disappointed after sitting on this recipe for a few years waiting for an occasion like this. Oh well.

Camp Watson is located on an estuary where the Union River meets the ocean bay. Eighty years ago,  a large dike was built to keep the ocean out. At first the farmers tried to raise cows in the reclaimed land; later they raised wheat. A few years ago the Hood Canal Salmon Restoration Group worked with the Johnson family (which owns the farm) and the US  and Washington state Fish and Wildlife Services to reclaim the area. Last year two large holes were punched in the dike and ocean water made its way north.

I’m looking forward to going back in the next few years to see the flora change.
Along the dike there is a nice wooded area. We saw some pretty berries; but DON’T EAT THEM -THEY ARE POISONOUS

Girls and boys took separate cars for the hike; on the way back the guys decided to head over to Allyn for burgers at Big Bubba’s, a popular walk up burger joint on the Case Inlet just east of Hood Canal.

A drive of a couple of miles by car would take a full day or more by boat. You’d travel north up Hood Canal up to Puget Sound north of Seattle, then south past Seattle and Bremerton to Gig Harbor and Tacoma. You can see the difference between overland and by water routes in the map below.

On Saturday morning we went on an outing to Port Orchard and Bremerton. We first headed to the farmers’ market in Port Orchard. A nice ’55 (I think) Chevy wagon pulled up. Nice car; but if I were doing it, I’d leave the bumpers chrome and wouldn’t put those flames on it  – more stock in other words.

John picked up some bees’ wax to add to his tool box when he’s driving screws and what-not.
Then we took the foot ferry from the dock near the market over to Bremerton. We walked about at Bremerton a little but there wasn’t much to do other than grab an iced coffee or some ice cream. There is a park near the waterfront but it was reserved for an event. You can see the location on the map above.

When we got back the tide was up and the water warm so we went swimming. The water here is perfect for swimming; salty so you can easily float, no waves, and very warm. The Lees were responsible for dinner on Saturday night; we had some nice grilled steaks and perfectly grilled small potatoes.

Sunday morning we had some blueberry pancakes and sausage thanks to John and Karen; then we packed up. The tide was out and Carla grabbed a picture to compare with the high tide pictures above. Notice The Barnacle in the upper right is still in deep water while the smaller sailboats are grounded. You can also see some oyster beds in the center left of the pictures

We had a great time, as usual, at Camp Watson but we had to go back home.